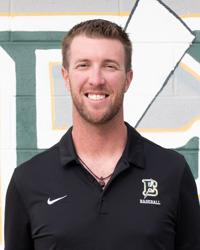 He then went on to play collegiate ball at the University of Northern Colorado, Golden West College, and Dakota Wesleyan University, serving as team captain in two of his college seasons.

After his collegiate career came to an end, Coach Cappuccilli traveled to Europe to continue his playing career, while also coaching youth players and coaches to introduce and expand baseball in various European countries. In 2014, he traveled to Vladivostok, Russia and Santiago, Dominican Republic where he conducted clinics for local coaches and players. He returned to Russia on various occasions to continue the expansion of their baseball programs, working with local and state governments to help create a developmental program for Russian baseball. In 2015 he travelled to Shanghai, China to work with Major League Baseball in their player development department in order to promote and prepare Chinese, Taiwanese, and Korean baseball players for professional baseball in the United States. Coach Cappuccilli has previously coached at

Baseball runs in his family as his brother, Tony, was a minor league manager in the Los Angeles Dodgers organization and and now with the Detroit Tigers. His brother in law, Dale Thayer, is former major league baseball player. They are both also Chargers baseball alumni.

Coach Cap currently resides in Lake Forest and has a daughter named Reya.

Coach Cap is a Spanish teacher at Edison and brings an infectious enthusiasm to the classroom, as well as the baseball field.

Gentile began coaching at the high school level at Edison in 2007/2008 and saw the program achieve great success. He then coached at CDM for five years, as both hitting and infield coach, playing an integral part in the turnaround of the program (playoffs every year and two league championships).

Coach Gentile then traveled across the Bay to Newport Harbor and saw tremendous growth of the program in the three years he was there.

Coach Gentile is grateful that Coach Cappuccilli has brought him back “home” to help rebuild the program to national prominence. Gentile will be working with the hitters and infielders.

“I am beyond ecstatic to be back. I want to help these young men develop their skills on and off the field. This is a great coaching staff and a fine group of young men. The skies the limit”.

Coach Bailey started coaching at Edison in 2018. Coach Bailey has been coaching at the Junior varsity level since he started at Edison; assisting players fine-tune their skills in multiple areas of the game.

Coach Bailey enjoys all aspects of the game… strategizing, managing, and teaching proper mechanics in hitting, fielding, catching and throwing.  Coach Bailey has spent many years in the travel ball circuit coaching under Fernando Arenado at Arenado Baseball Club in Lake Forest, CA. Surrounding himself with talented athletes, inspirational motivators and top-notch coaches.

From Coach Bailey: Heavily embedded in our community helping young players develop and prepare them for high school baseball. In my off time, I manage a local Feeder program.

The ultimate Goal: I would like to share my expertise and experience with the younger generation and provide them with the skills and knowledge to succeed in life and baseball.

Coach Wagers is in his 30th year of coaching baseball. He has coached both travel ball and high school baseball.

Coach Wagers attended the University of Houston. He has spent the last 30 years as a resident of Huntington Beach with his lovely wife Candy and one of his two sons Dustin, who is joining Coach Wagers on the coaching staff for Edison Baseball. His other son, Jeremy, resides in Houston, Texas.

Coach Schnoor is an alumni of Edison Baseball. As a Huntington Beach local he grew up playing baseball at Seaview Little League, Fountain Valley Pony Ball and on several local travel ball teams.

Coach Schnoor played baseball and football at Edison, baseball for 4 years and football for 1 year. He graduated Edison in 2021 and is currently attending Golden West College where he is majoring in History.

This is Coach Schnoor’s first year as a high school baseball coach and he is also coaching a youth travel ball team. He is excited to spread his knowledge and love for the game of baseball and to help build up the Edison program! In his words...

"My main goal of this year is to of course have a fun and successful season, but to also create good habits with the boys in the classroom and in life. I was a scholar athlete every year at Edison, which means I had a 3.5 GPA or above. I am excited to spread my knowledge and love for the game of baseball and build up the Edison program!"